We operate specifically on the way that an Agency does business. The AURSI system is truly saves time, labor and cost associated with maintaining accurate, up to date “real time” information which is so critical to all operations. 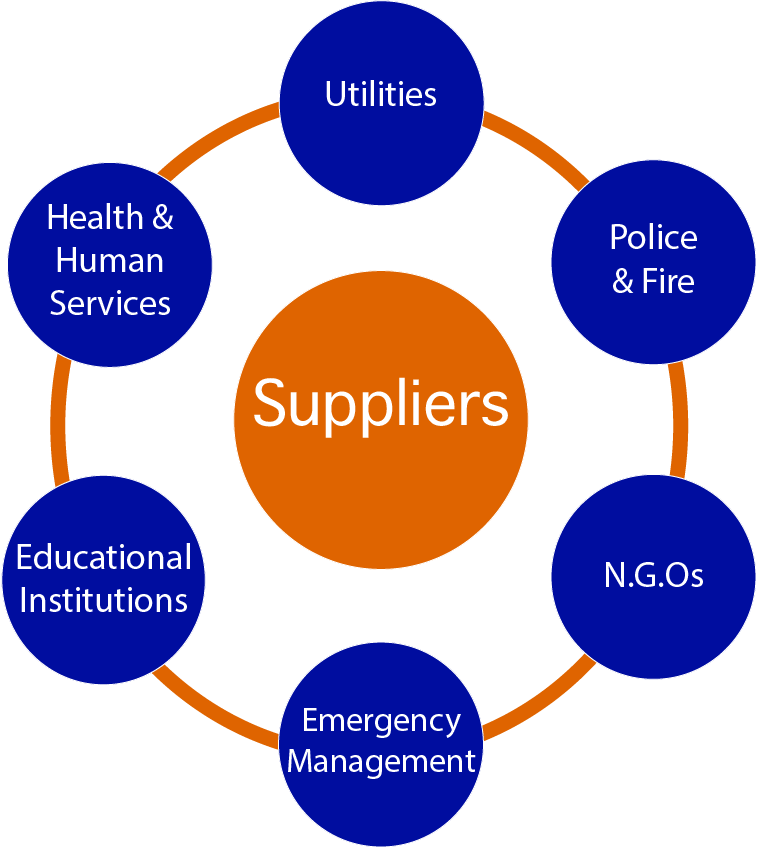 AURSI has been in business since 1998

During that time AURSI has stayed on focus with what the customers (across the U.S.) have asked for many years. The system was built on the Purchasing, Engineering and Suppliers input. This is very critical as we were in the lead of the .com era and staying ahead of the curve. We continue to stay focused on building a “Virtual Community” with a Network Effect. AURSI is used as a tremendous resource application for our members as well as in an emergency disaster. AURSI designed the platform where, at a click of a button and agency and suppliers can search by stock number, description, manufacturer, catalog number and by a specific agency. Many of our customers use the system strictly for maintaining their Material Standards Manuals (MSM) as well as bidding to “selected suppliers”. We operate specifically on the way that an Agency does business. The AURSI system is truly saves time, labor and cost associated with maintaining accurate, up to date “real time” information which is so critical to all operations.

John Tingue, Chairman of the Board of AURSI has a very diverse background in the Governmental Agency Industry. John holds an Associates of Science Degree in Business. John came through the ranks of the City of Ocala in Florida. John retired from the City and his last position held was the Deputy Director of Purchasing. John held the certification of a Certified Public Purchasing Buyer (CPPB) through the National Institute of Governmental Purchasing (NIGP). John brings a high level of purchasing, inventory and materials management for electric and water/wastewater utilities. John spent many years assisting with resourcing material, parts and services in the Marion County Emergency Operations Center (EOC) under the Emergency Service Function (ESF) number 7. John has been directly involved is restoration of 11 hurricanes and major disasters. This involvement led to the creation of AURSI shortly after Hurricane Andrew in August of 1992, where John worked restoring Homestead for 17 weeks. John is one of the developers/owners of AURSI with a proven track record of 22 years of aiding governmental agencies.

John proudly served our country in the U.S. Army for 14 ½ years and is a disabled veteran. Prior to becoming the Deputy Director of Purchasing at the City of Ocala, John built power lines and is certified in live line barehand work up to 500kV. See more on John’s LinkedIn page.

Glenn Douglas Oliver is the co-founder and CEO of H2bid, Inc., a company providing data and software solutions to the water/wastewater utility industry. Prior to co-founding H2bid, Oliver served as a water commissioner for the Detroit Water and Sewerage Department (which provided water and sewer services for four million customers in 128 communities).  H2bid has been recognized in national business media, including Forbes, Fortune, The Wall Street Journal, and Xconomy. H2bid also completed the Springboard accelerator program at CONNECT in San Diego. H2bid is the #1 lead generation service for companies in the water/wastewater utility industry.

Previously, Oliver served as a member of former Detroit Mayor Dennis W. Archer’s Cabinet. In that role, he managed eight city departments (approximately 25% of city government, $300 million in total budgets, and 4,000 employees), chaired the City’s Strategic Technology Committee, and served as a member of the Michigan Municipal League’s Board of Trustees.

Oliver has a J.D. from the University of Michigan Law School and B.A. from Michigan State University’s James Madison College. After graduating from law school, Oliver served as a judicial law clerk for the Michigan Supreme Court. Oliver is a licensed attorney in California, Michigan, and Minnesota.

Chris Staggers, the President and founder of the AURSI and started developing the platform shortly after the Hurricane Andrew disaster.  Chris has a BSIE Industrial and System Engineer from University of Florida. Chris began his career working for CSX Railroad. He was the Production Engineer Florida Wire and Cable and Standards Engineer FWC Supply. Chris was the lead outside Sales Representative for WESCO Distribution. He then went to work for John Carter and Associates, a manufacturer’s representative with many complex lines. Chris set the sales records for John Carter.  Chris has a very proficient background in the following coding: ASP.Net, C#, Java Script, MS SQL.

Chris’s is a registered in Black Belt Karate and a long time Cycling master.

Using AURSI means a vast reduction in costs for maintaining a manual, as well as new efficiencies with supplier information, shared designs and specifications, and immediate online updates for your entire enterprise.

AURSI customers come from varied backgrounds and geographical areas–each with their own specific challenges and requirements. Both Utilities and Suppliers find AURSI the solution they’ve long needed for their supply-chain management.

Find us on Linkedin